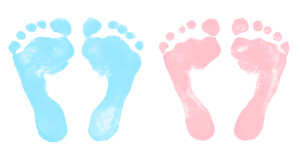 For as long as couples have been having babies, couples have been trying to accurately predict whether they should invest in wallpaper with butterflies and flowers or airplanes and trucks. Today, medical science can give couples a fairly definitive answer about the baby’s gender by the second trimester.

Still, most couples want to try to at least guess at the baby’s gender before they know for sure. At worst, baby gender prediction methods have a 50/50 shot at being correct and they aren’t generally harmful to the expectant mother or the child.

Most medical professionals will tell you that other gender prediction methods, whether the Chinese gender prediction calendar, the Drano method, dangling a ring in front of your belly or some other method, are unfounded and have a roughly 50% chance of correctly predicting your baby’s gender.

As early as 18 weeks, your ultrasound can predict your baby’s gender with an accuracy of about 85%. That’s significantly better than any traditional method, including the ones which doctors recognize as having some degree of validity.

That’s not to say you shouldn’t try to predict your baby’s gender ahead of the ultrasound. By all means, if you have a traditional gender prediction method you believe in or enjoy, have a good time with it. Who knows? There could be something to it that medical science simply hasn’t figured out. At worst, you have a 50% chance of correctly predicting your baby’s gender.